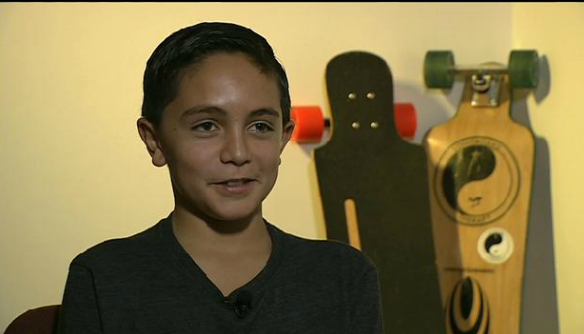 A lot of kids like skateboarding but for some, it's more than just fun and games. One local therapist is making breakthroughs with his Therapy on Wheels. Check it out, in tonight's Parent to Parent.

(WSVN) -- James Beltran always seemed like a happy kid, but there was something going on behind the 11-year-old's smile.

Even his grandmother sensed something was wrong.

Barbara Beltran: "I noticed he was having a lot of struggles with being happy."

James Beltran: "I told her I wanted to go to therapy."

So he went to go see Isaac Farin, a marriage and family therapist who says kids deal with a lot these days.

Isaac Farin: "Kids having a heightened sense of anxiety and stress when it comes to schools and going to events."

But instead of traditional therapy like talking in the office, Isaac calls it longboard therapyTM.

Isaac Farin: "This exercise forces you to be in the moment."

Isaac said James was holding on to negative feelings but this sport forces you to focus on what you're doing at the present moment.

Isaac Farin: "The longboard therapyTM helped with the idea of learning how to let go."

James says the longboarding made him feel more comfortable and willing to open up.

James Beltran: "We'll stop at little picnic tables and stuff like that and then he'll talk with me, 'What did you see on this ride?'"

In fact, James loved it so much, even though his therapy is over, he's never stopped longboarding.

Barbara Beltran: "He's done skating competitions. He went to Clermont, we did a race there."

Barbara has also noticed a huge change in her grandson.

Barbara Beltran: "The first thing I noticed was his laughter, he never laughed, really laughed.",

Isaac says he also had James keep a gratitude journal. Writing down a happy moment in his day, every day.