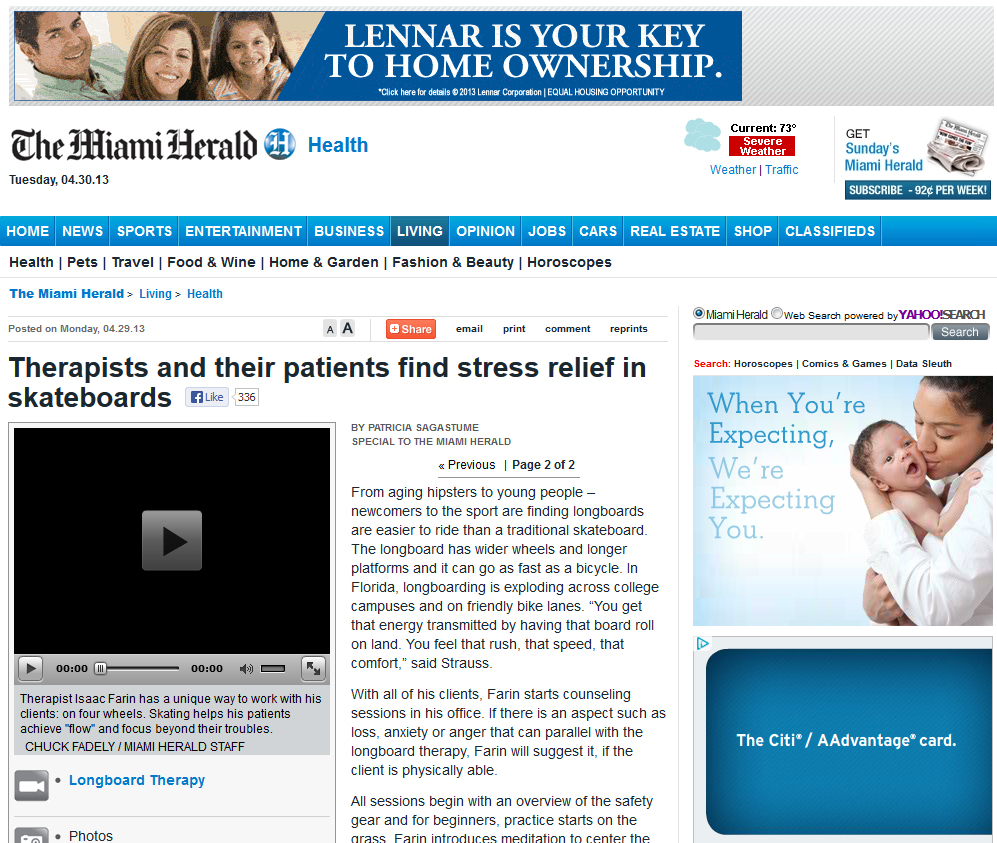 Farin realized longboarding had all the hallmarks of the positive psychology theory called flow. Flow is what surfers and skateboarders call stoke and it’s that feeling of complete happiness in the moment. Farin believed that by teaching his patients to longboard, they could take their minds off their pain, let go of fears, maintain a sense of control — all while having fun.

When all those things happen at once, time seems to fly by.

“ I believe in this process of using the present moment to move towards a more hopeful future. It’s a little bit different than some traditional psychologies that focus more on the past and then, only then, will you change,” said Farin.

Batista, who was a pitcher for Florida Atlantic University, liked the idea of exercising but didn’t want to leave his home. Farin suggested Batista take baby steps.

“I suggested he come to the park with me and if he could only put on his sneakers that would be fine, ” said Farin.

Once he got to the park, Batista said it wasn’t much more effort to get on the board. He quickly found the sensation of riding a longboard gave his mind and emotions a break.

“The first time we went longboarding, it made me realize how important it is to exercise. For one, it helped me not think about what I was going through and reminded me that having a healthy body helps you have a healthy mind,” said Batista.

Today, alternative forms of therapy are helping people sort through emotions, conquer phobias and face childhood traumas. So far, Farin is the only therapist to have his longboard sessions sanctioned by the International Distance Skateboard Association (IDSA). This recognition means his lessons qualify as an organized event. For a $20 yearly fee, participants can purchase medical insurance that covers injuries during a session — with coverage up to $25,000 an incident.

“We know longboarding helps. The way I like to explain it is that the second you hop onto a board, you have endorphins times 10. Slowly people like Isaac are proving that longboarding is a legit treatment,” said Jonathan Strauss, founder of IDSA.

From aging hipsters to young people – newcomers to the sport are finding longboards are easier to ride than a traditional skateboard. The longboard has wider wheels and longer platforms and it can go as fast as a bicycle. In Florida, longboarding is exploding across college campuses and on friendly bike lanes. “You get that energy transmitted by having that board roll on land. You feel that rush, that speed, that comfort,” said Strauss.

With all of his clients, Farin starts counseling sessions in his office. If there is an aspect such as loss, anxiety or anger that can parallel with the longboard therapy®, Farin will suggest it, if the client is physically able.

All sessions begin with an overview of the safety gear and for beginners, practice starts on the grass. Farin introduces meditation to center the focus on the board and then the on-board lesson begins. Both patient and therapist ride side by side and then they go on a silent ride from one end of the park to the middle.

“We both ride together. We don’t talk. At the midpoint there’s a bench where we talk about what we saw and heard. My intention is to focus the client on feeing the present moment,” said Farin.

After four months, Batista says he’s not mired in grief 24/7 and he can feel joy again. He’s had his last session and will come back as needed but for now is focus in on his next goal — to regain a sense of purpose in life “

I want to find more meaning to life than just work. I realize that sometimes during the day when I feel sad, it’s OK. Part of it is that is I don’t want to forget my wife but now I’m OK going in that spot,” said Batista. “Longboarding helped me realize that I can be in the moment and then move on.

” Even for younger clients who know how to skate, longboard therapy® has been useful. Robert Aguilar is a 14-year-old high school freshman at Hallandale High. When he broke up with his girlfriend, things started to unravel and he was angry all the time.

“I ended up breaking up with my old girlfriend. Then I got a new girlfriend and then she broke up with me. I don’t like to fight but when I do, I lose my temper so I keep it inside. It was just a complete backfire,’’ Aguilar said.

“When I met Robert there was no distinction between anger and Robert,” Farin said. “His mom was very concerned about how he handled his anger, locking himself in his room, being with his head down all the time. Now he’s developing awareness about when he’s angry. He’s can see that he can control that by making small changes.”

Aguilar was all smiles as he whirled quickly by a loop on the concrete tree-lined trail. Giant iguanas stayed motionless in the warm sun as therapist and patient rode silently by.

Even though Aguilar is an advanced skater, he was drenched in sweat as he gained speed around a bend. Afterwards, there were high fives and new goals to consider.

“Isaac sees the changes and that’s what helps me,” said Aguilar. “You just forget about everything on the board. Now I tell myself even if things get me mad, everything is OK and it starts to wear off.’’